Panniers are by far the most common bicycle carrier. But, I don't use them, and if you are serious about weight saving, they are the first thing to abandon. By doing so you'll probably get rid of a heavy rack too. Here are some alternatives that I'd recommend.

Backpacks. Based on the previous axiom (content to container weight), I'd chosen a backpack instead of panniers as my primary container (picture below). A backpack (stripped of unnecessary straps and belts), together with a bungee cord or two, is lighter than any pannier(s) of the same capacity. For example, my 40 l backpack was 1120 g, and is now 820 g after I cut off the waist belt and removed few other appendices. For comparison, if you take 2 Ortlieb 'Back Roller' panniers, the capacity is the same, 40 l, the weight is almost twice as much, 1630 g (data taken from Ortlieb website).

Besides the weight argument, backpack is excellent for hiking and site-seeing and very appropriate when carrying your bike and stuff for larger distances (across river, mud, sand, stairs and other obstacles). The excellent thing about it is that it has no mounting system that can (and eventually will) break. It fits on any type of rack, never gets into the spokes, doesn't bounce while riding and has no issue of 'heel clearance'. It never gets wet in river fording, and even if the rack fails it isn't the end of cycling - you can still pedal to the next repair shop with your luggage on your back. One additional advantage, which, to be honest, I haven't fully proven, is the possibility to reduce the aerodynamic drag if you position your backpack lengthwise on the rack. Backpacks have so many advantages that one wonders why so few people use this setup. My answer is: they are effective only if they are reasonably small - which brings us back to weight and volume reduction. I use a 40 liter backpack with internal aluminum frame - it is important that a backpack is rigid and doesn't hang over the rack. Don't ever carry the backpack on your back while cycling.
P.s. Nowdays I don't use backpacks - I found much lighter alternatives. See stuff-sack setup below.

Waterproof bag. An even lighter alternative to the backpack is a waterproof stuff-sack/bag. My waterproof bag is almost one half of the weight of the backpack of the came capacity (40 l). The bag has additional advantage of waterproofness, but, alas, is not appropriate for hiking and, also, items inside are not as quickly accessible. Nevertheless, for a pure cycling trip, it's ideal in my opinion.


﻿﻿
Stuff sack. Just when I thought I can't go any lighter, I discovered another option. On the South American tour I used a very light stuff sack (160 g) tied to rear rack together with a tent (2 photos at the right). Instead of foam sleeping mat I had a strip of bubble-wrap; this reduced volume significantly and beside that I could wrap all my things in bubble-wrap and put the bundle in the stuff sack, making it practically waterproof. It worked wonderfully and it's going to be the standard from now on. When I decide to replace the big SLR camera with a tiny digital one, I think I'll be able to get rid of the handlebar-bag too.

Front and rear. I use both front and rear containers. The original reason for this was the possibility to transfer weight between rear and front in case of damaged wheel. It is a kind of anachronism nowadays, when I don't have enough weight to cause the damage, but I still carry a handlebar bag mostly to store frequently used objects such as camera. It goes without saying that this bag fulfills the ratio condition mentioned above.


Underseat bag on handlebar. I adopted the above mentioned camera strategy on my trip to Indian Himalaya. The digital camera was small enough to fit in a middle-sized underseat bag, which I modified to be used as a handlebar bag. The combined effect of lighter camera, lighter bag and no spare film rolls resulted in the lightest set-up so far, which you can see on the picture below. I may have scarified the quality of photograps a bit by using digital - be a judge yourself:
pictures from India.

Credit card touring. You can go far lighter then that if you never intend to camp. "Credit card touring" is not my preference, but if you fancy it, as an illustration, see the pictures from my short 1-week tours in the Alps (first, second). Not having camping equipment reduces the bulk of things so much, that you suddenly enter the miraculous circle of weight reduction - you have so little that you don't need any kind of racks. All the things can be supported by bicycle frame. On those credit-card (i.e. no-camping) tours I carried camera, overshoes, towel and skin ointment in a small handlebar bag (a modified middle-sized underseat bag) and other items like spare clothes, spare glasses, tools, etc in a bag behind the seat.
﻿﻿

The brevet style. Riding in a brevet (or "randonneur") style, over the whole 24 hours, opens new possibilities. These kind of rides usually involve a few short sleep stops (“power sleep”) and they do not require camping equipment. This greatly reduces the amount of luggage without any restrictions about riding longer distances or finding a place to sleep. From my experience, two to four instances of 30 to 45 minutes of sleep is all you need in 24 hours. You can crash in anywhere: in a designated rest area, on a bench of a bus stop, on a petrol station, in the forest or just by the side of the road. On a longer tour (about a month or so) you probably wouldn't ride this way on a day-to-day basis. But you could mix 24h or 48h riding with shorter episodes, staying in hotels every second or third day – reducing overall costs.  For further detail look at "Lessons learned from brevets" in the "News" page.

Bivy bag. The set up for a credit car tour can be extended to include emergency camping in a bivy bag. I tested this approach on a 2-week winter tour in Jordan and Israel. The setup is pictured and explained on the following photo - below you will find also a kit list.

I carried bivy bag and silk sleeping liner in the second bottle cage. Spare clothes, tools and few other miscellaneous items perfectly fitted in the compression bag which was secured behind the seat with two straps. Camera and few other minorities, as usual, was in the small under-seat bag on the handlebar. The spare tube was taped to the head tube. Thus, there was no need for a rack. In all it was 4 kg less from my usual "camping" setup. This can be viewed as a middle ground between full tour with camping and credit-card touring. To be honest, the bivy bag didn't work very well in the Middle East's winter, even though I slept outside only twice in rather balmy weather near the Dead sea. The night temperatures (5 to 8 deg C) were too low. But, with the addition of light ground sheet (a bubble wrap for example), I think this approach would work well for summer tours (with night temperatures above 10 C) in regions with good roads and frequent accommodation possibilities or in counties where camping is not easy. There are quite some parts of the world that would fit in: SE Asia, India, parts of China, Europe, North America.
A similar setup (with a smaller handlebar bag) was used in France in 2011, when I rode across 100 cols- take a look at the picture below and on the Equipment reviews page for more detail.

Sleeping bag. Much better alternative for a bivvy bag is a light (summer) sleeping bag. With the setup like that you can make a camping tour with a light road bike and so little luggage that people will think you're on a day tour. This is the approach from my second visit in France for the "200 cols tour" (the detailed packing list is there).
The setup for this tour is shown in the picture above. The carrier behind the seat is a compression bag for a 3-season sleeping bag. There is a much smaller summer down sleeping bag in it (472 g), a nylon sheet (34 g), off-bike shorts and some other smaller items. To reduce the contact of the bag with my thighs, I tied a plastic bracket (10 g) to the back of the seatpost as a spacer. Rain jacket and arm warmers are in the grey bag in the second bottle cage. A small camera bag (40 g) is tied to the handlebar, containing camera, tools, ointment, and reflective belts for night riding. Spare tube and lock are tied around the head tube. There is also front and rear light. 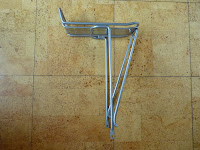 Rack or no rack. If you came this far in reducing your weight, you'll probably ask yourself the ultimate question: do I need a bicycle rack at all. There exists an aversion against racks, maybe even derision, among top ultralight cyclists. The alternative is to carry your luggage in underseat bag, handlebar and/or frame bags, which attach directly to the bike. But is this really a big step forward? With regard to weight, the frame bags are probably winners - although just tightly. On the other hand, with a small, light rear rack without unnecessary struts weighing 400 grams including the mounting hardware (the rack in the photo is 414 g - it's listed as front rack, but I use it as rear rack), 30 L stuff sack (130 g) and a bungee cord (70 g) you've got yourself a versatile and simple carrying system of 600 grams, that will flawlessly carry most of your stuff including a tent, sleeping bag, sleeping pad and set of warm clothes. I don't believe any reasonably sized single frame bag is big enough for that, and any two bags will struggle to keep their weight withing the 600 grams. Also, a big frame bag will probably be more unstable (or will need much stronger (=heavier) attachments) then if it's bungeed to the rack. Then there is a question of elegance. You haven't gone this far reducing your luggage and scarifying your comfort (so they say), just to end up with amorphous black blots covering your bike all over. If you don't believe my words, just look at the picture above, showing my bike on the Middle East tour. It doesn't have a rack, but is stained all over with bits of stuff strapped here and there. And, last but not least, it's so simple to bungee anything on the rack - a rain jacket for example when the weather is changeable and you take if of and on all the time.
This is not to say I am against frame bags, or that I will not experiment in that direction, but for now, until the world came up with something more elegant and innovative, I prefer the versatility of a small and light rear rack - at least for full-kit camping tours. (See also "Racks" in Equipment Reviews page).